From pastel-coloured parasols to ruby-red cocktails, hypnotic French music and giant wheels of raclette, So Frenchy So Chic is a music festival that’s a feast for the eyes, ears, heart and soul.

We’ve been to many music festivals in our time. From muddy fields to soggy burgers, and let’s not even get started on the line for the portaloos (quelle horreur!), they’re mostly dirty, sweaty, lively experiences. However, when we think of festivals, chic fashion, fine wine and gourmet food doesn’t normally spring to mind. Which is why nothing – and we mean nothing – prepared us for the sheer beauty and delight that was So Frenchy So Chic (SFSC), the one-day celebration of all things fabulously French.

Picture the scene… It’s a beautifully sunny Sunday in Melbourne. The sky is a bright blue and the grass beneath your feet is a shade of green so vibrant it dazzles. In the distance, you see the magnificent Werribee Mansion, and all around you, women float by in dresses made of cotton or chiffon, wearing flower crowns or twirling pastel-coloured parasols. Meanwhile, men in chic fedoras or straw boaters stroll by, a ruby-red cocktail in one hand, a cane picnic basket in the other. The air is heavy with the sweet smell of crème brûlée and the sound of hypnotic French music. Le sigh….

So French, So Chic

You could certainly be forgiven for thinking you had somehow been transported to Paris or Provence, so utterly French is the scene before you. But, alas, you’re at So Frenchy So Chic, the one-day music festival that does exactly what it says on the tin. The brainchild of Jean François Ponthieux, the event first launched 10 years ago, and it has been delivering on its promise to create and capture that sense of joie de vivre ever since.

“I actually started SFSC as a compilation album in 2005,” explains Ponthieux. “We sold over 40,000 copies in two years, and I realised there was a growing interest in contemporary French music. In 2007, I organised the first tour, a double bill featuring Nouvelle Vague and Emilie Simon, which sold out the Art Centre in Melbourne and the Metro in Sydney. I then set up five double-bill tours between 2007 and 2011. While observing my audience during these shows, I realised they were looking for a different experience, and the picnic in the park idea was born. I found Werribee Park – the ideal setting – and successfully launched the first event in 2012.”

Since then, SFSC has grown into a festival attended by thousands, with a carefully curated array of music, food and drink on offer. The chic cuisine this year was created by Antoine Moscovitz, of Bellevue Cottage, who also trained under Alain Ducasse and was formerly private chef to House of Roederer Cristal Champagne. It included (but was not limited to) oysters, lobster rolls, croque monsieur, pissaladiere and crêpe create. You could also pre-order luxury picnic hampers which included delights like crispy pork belly and truffle mash, with chocolate Mozart cake for dessert.

Drinks came in the form of champagne (of course), wine and delicious Pampelle cocktails, served at the stand created by Flying Ruby Events. “We created the activation for Pampelle (see below) within the festival,” explains Flying Ruby Events’ Managing Director, Kelly Lewis. “We flew in on Friday to be on site, first thing Saturday. We built the stand all day – our suppliers came in, plus our furniture and freight arrived – and we then returned the next morning to dress everything. 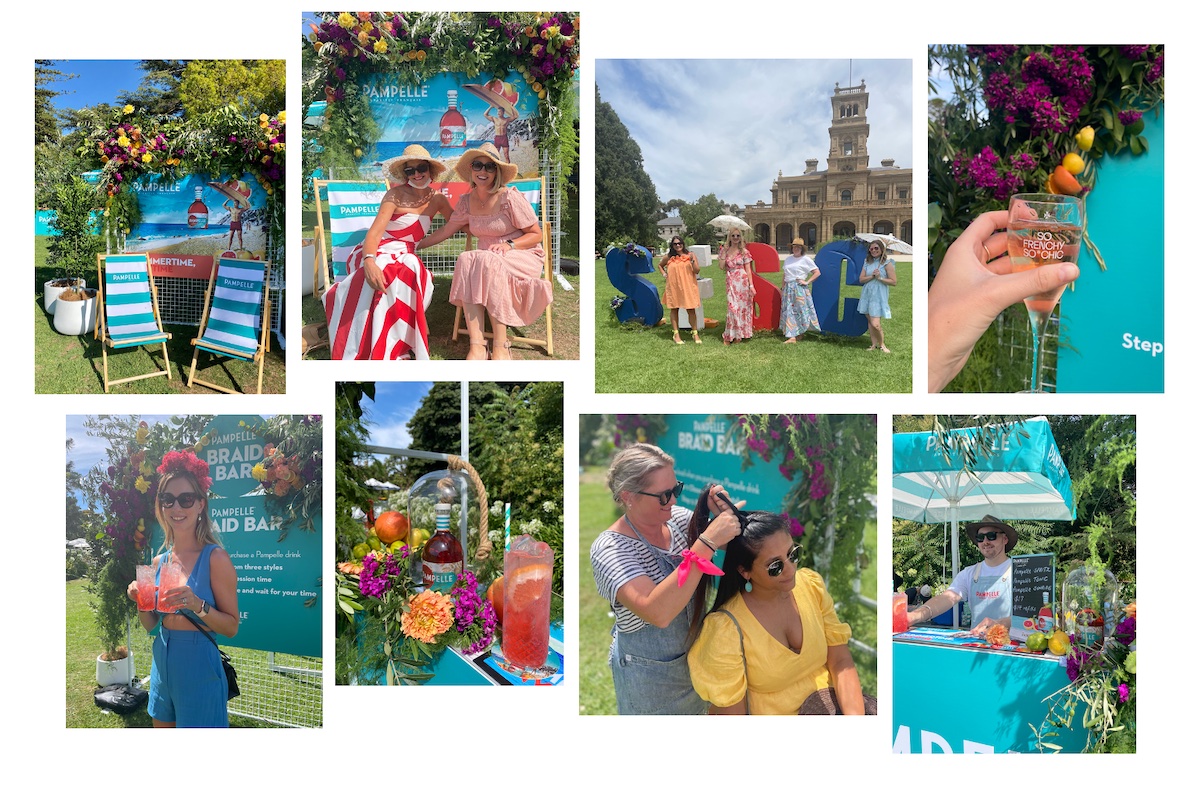 “At 8am our florist arrived on site, and she brought all the florals, layering up the signage and adding those beautiful fresh elements to the stand. We created the menus, the creative around the floral pops and those finer details, like styling the bar with fresh lemons. We served Pampelle Spritz, which is the brand’s signature drink, Pampelle and Tonic, and a Pampelle Sunrise, which sold out after lunch. We also wanted to incorporate some fun into the activation, so we created a braid bar that everyone loved. So, over four hours we had three braiders adding little braids to people’s hair, which was really fun.

An Event For Everybody

“Overall, the event was quite incredible,” Kelly continues. “Everything was beautiful, it felt so elegant and stylish and so… French. There were two things that excited me about the day. First, it was a festival that had very much a ‘picnic-in-a-park’ vibe. So you would look to your left and a woman would be tapping her foot to a beautiful French musician on stage, while she was reading the newspaper, enjoying her Sunday. And to your right, you had people dancing around the stage front, having the time of their lives. And then there were families, three metres away, sitting down, having a picnic together. It was an event for everybody – I loved it.

“And second, the energy was amazing. Seeing people without masks, enjoying themselves, smiling, relaxing and being near each other was divine. It was so great to see a large crowd together, albeit perfectly distanced. We need to get back to that type of event, and soon. Everyone’s ready, but especially Melburnians. After the last couple of years they’ve had, this couldn’t have come any sooner.”

Ponthieux concurs. “I worked eight months to put this puzzle together; seeing it come together was a real thrill. I enjoyed the multiple experiences which make SFSC a unique event. From the music and food, to Pampelle’s braid bar and kids’ activities… But my favourite part this year was the conviviality and joie de vivre; it was a much-needed medicine.”

To find out how Flying Ruby Events can create a bespoke event or activation for your brand, get in touch HERE.