THERE ARE SO MANY REASONS (1.5 MILLION, IN FACT) WHY I LOVE WORKING ON THE CHILDREN’S CANCER INSTITUTE’S CEO DARE TO CURE EVENT. HERE ARE JUST A FEW…

As the owner of an events company, I know choosing a favourite client is almost like admitting to having a favourite child. But there is one particular event that holds a special place in my heart – the Children’s Cancer Institute’s CEO Dare To Cure. Full of emotion and generosity, love and support, it’s an event that I’m incredibly proud to be a part of. I also feel grateful that I get to play a very, very, very small part in helping the Children’s Cancer Institute cure childhood cancer one day.

I began working with the Children’s Cancer Institute in 2014 when Flying Ruby Events was approached to produce its signature event, the Diamond Ball, which we continue to produce today. In 2018, we began working on CEO Dare To Cure and, right from the beginning, I knew it was an extraordinary experience to be a part of.

The premise is simple – we ask participants to first fundraise, and then face a fear and complete a dare which might involve snakes, spiders, cockroaches, chillies, heights, or walking on glass or hot coals. The idea behind the dare is that the discomfort the participant feels in that moment will never compare to the pain and discomfort a child feels when they’re experiencing treatment for cancer. This is what motivates so many CEOs and business leaders to become involved in such an amazing event and fundraise, year after year.

It’s part of the reason why I love being part of CEO Dare To Cure – the dedication and commitment of the people involved each year knows no bounds. You think you reach a target, and you’re overwhelmed with the result that year, and then the following year that target is just blown out of the water.

To say I’m super proud is an understatement. Obviously, its success isn’t just down to us – there’s a whole army of people working towards the result – but to be involved in some small way, I feel very lucky. It’s hard not to love what you do and it’s so worth the extensive planning that goes into an event like this.

You see, what might be a three-hour event for the attendees takes months and months to prepare, and days to set up and then pack up. Because we’re a smaller team with multiple events each month, we like a longer lead time, and outdoor events require a lot more organisation and planning with risk assessments, wet weather contingency plans, fire evacuation and safety plans, waste management and sound management plans. And then throw in, I don’t know, 54 versions of forever changing COVID plans, and you’ve got a pretty busy eight or nine-month lead time.

But, because we’ve been organising it for so long, and there are so many plans that chop and change, and the work that goes into it is so much harder, on the day of the event, it’s so much more gratifying. You know about all the blood, sweat and tears that have gone into it all. It feels so sweet on the day to pull off a successful, seamless event.

CEO Dare To Cure this year began with a bump-in on the day before the event, with our whole team on site from 7am, when we took over Sydney’s Fleet Steps and started building the marquee. Then the audio-visual team arrived, the furniture suppliers, and the caterers, which all happened around midday. Our dare suppliers bumped in next and by 5pm, the site was completely built, and we handed it to our overnight security.

The following morning was a 4am wake-up call. We checked emails to make sure there weren’t any changes to our media call or participant updates, before arriving on site at 5am. We were the first ones there, followed by the Children’s Cancer Institute staff, and event suppliers. It’s pitch black at this time of the morning but there’s already electricity in the air – everyone is adding those final touches to get ready for that 6am guest arrival.

We completed some last-minute tests of audio visual and then the suppliers of the dares began to arrive. Everything from pythons to fire pits, and this is when it gets exciting as it’s all starting to come to life. It’s also probably my least favourite time at an event, even after 18 years producing events – those 30 minutes to an hour before doors open. But the minute the doors open and the event starts, I completely relax. It’s showtime!

So, what’s my favourite part of the event? Without sounding a little bit odd (or like a sociopath), it would have to be walking around and seeing the pure fear on the faces of Australia’s top business leaders as they do their dares. Ha! When you’re watching someone lying in a perspex box with a python over their neck and one over their feet and these snakes are slithering in and out of their clothes, and they’re terrified (the CEO, not the snake), it’s amazing. I know in that moment that I’ve fulfilled the brief and I’ve done my job.

I also love seeing the look on the participants’ faces when they’ve completed the challenge. They’re so excited and the air is charged with electricity and emotion. The highs and lows, the fear and elation, it’s quite extraordinary. I love the way people cheer each other on – it’s such a supportive atmosphere. This is a very high-level executive audience and everyone is in their shorts and T-shirts – they’re all on a level playing field at this event. It doesn’t matter if you’re the CEO of a listed company or the founder of a small business, everyone is there united for the same cause – to one day cure childhood cancer.

To find out how Flying Ruby Events can create a bespoke event or activation for your brand, get in touch HERE. 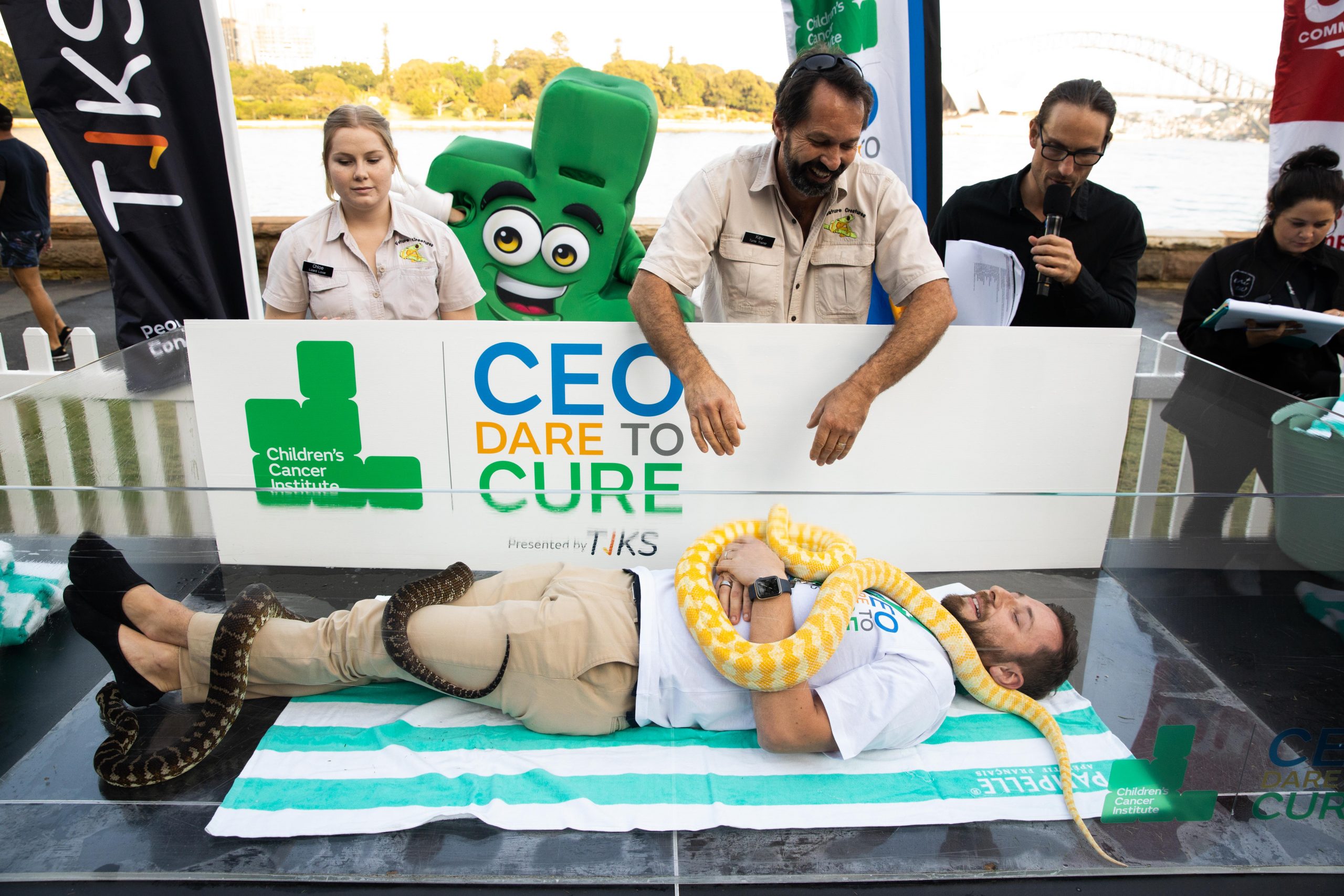